The Titans, eternal giant beings with incalculable powers, once considered mythcal creatures, but lately reports of the appearance of some became more and more frequent in the magical kingdom of Guba, brave warriors, curious magicians and thieves thirsting for fortune began to search for them. Guffus, the strangest gnome you've ever seen, has always been fascinated by great things, in fact, gigantic things - big boobs, big butts - and how great his desires were also his bravery. Someone said that all the titans are females and Guffus did not resist the urge to see an immense ass. Rumors of the dead raising from their graves in the anciant cemetery near the village Golfindoia of the Frogs can only be the work of the profane and erotic spells of a Titan!

Does a stinking gnome be able to defeat these powerful creatures?

Guffus like every gnome, has magical powers. He can create magic orbs to play with friends, but can be used to hurt when needed.

- Kissing Orb: Soft, does not do much damage but when hit in "delicate" parts provides much pleasure.

- Orb of the Stars: able to do considerable damage, is basically a stone with explosive thorns.

He can also pick up small things to throw on enemies when necessary.

PRO TIP: Use alot of Kissing Orbs, you have plenty!

-Tutorial Dungeon! Now it's time to learn how you should play this game with Seal! No more rage quit!

-Gnomic Enchants (At Config Menu): Activate cheats, special events and teleports to specifics maps! All Gnomic Enchants are taught for who are Gnome Supporter Tiers or more at Patreon page.

WARNING: Healing Enchants should be avoid, it's too OP!

v0.2.2b
- You can throw while walking! ( but you walk slower than normal!)
- At the titan battle if your pink mana is lower than 50 there’ll be a spawn of Heartberry bouncing somewhere in the map. This spawn occur only once per minute.
- Changed the titan LOVE and RAGE bar, Now it’s more intuitive.
- The stone do more damage now, same damage as the Orb of the Star. And it’s the best damage dealer agains the Titan’s Armor. Remember you can carry up 3 stones at once!

The core gameplay is pretty solid, so... It's time to develop the GAME! what is my schedule?

-> "Special Service" with the shopkeeper <3

-> Golfindoia of the Frogs Village and its NPCs.

Every major update should take 2~5 weeks to be release, It's hard to guess, unfortunately i can't work fulltime on my lovely game yet. Please consider supporting Gnome'n Titans if you want faster development and steady releases, with 2 bucks you access the latest version of the game and you help the project alot!

This is one of, if not the best game with the highest potential on this site. If i could make a suggestion could you please add a gallery for all of the bosses after youve beaten each one? I know im half a year late but keep up the good work.

Hey there, I wanted to give some feedback after playing your game for quite a while since I think it has a lot of charm and things to like, but some glaring  flaws that are dragging it down.

So first off, I think this game has a lot of potential and the .2.2 update fixed a lot of the issues in the older version. The art and animation is good and has  a lot of character to it as well.

That being said I think there are a lot of underlying game design choices that don't make this game hard per say, they just make it tedious to play and I'll address them one by one:

Right off the bat I think this should be changed. Having your main way of dealing damaged be so limited, especially for the boss who you can't hit with your fists makes this game a chore to play. In fact, the best option for the first screen is to run past all the enemies and not shoot a single orb since otherwise you'll run out when fighting the boss, which will most likely happen anyway. I think it's fine to have the thorn shots be limited, since they are more powerful, but I'd suggest adding in either ammo drops from enemies, having them replenish over time, or getting rid of them entirely. Ammo drops could work well since the boss spawns enemies and zombies also spawn at certain parts, so these could be a good way to give the player more resources rather than just throwing more hotboxes their way. I know the player can use rocks, but having to stop, find one, pick it up, and then find an angle to throw it since they don't go as far really kills the pace of the game. plus sometimes they fly off screen and don't come back. But the way this game is designed now, missing only a couple of shots is basically a death sentence.

-2: Too many enemies  and not a good way to deal with them

Enemies tend to litter the screen in this game, and the player doesn't really have a great way to deal with them. You can jump back and throw orbs, but since you have limited ammo, that will screw you over during the boss. The big flying enemies especially are a nuisance since they can deal a lot of damage and be quite hard to hit. With so many hitboxes on the screen and no really solid mobility options to avoid them, you are bound to get hit by something. And if you get overwhelmed by enemies, there's no great way to deal with them  with out taking a lot of damage yourself. I'd recommend adding a bomb that deals damage to enemies on the screen or near you like in other bullet hell games. It can be limited, but it will at least makes moments where you get swarmed a bit easier to deal with.

So I've attempted to beat this game at least 15 times now, and I've gotten to the point where I can get to the boss without getting hit and using very minimal shots. Even in that scenario though, I still haven't even broken all of the boss' armor. I've run out of ammo and rocks every time and it's gotten to the point where I genuinely think she isn't possible to beat. She simply seems to take too many hits to be defeated with the limited amount of ammo you have. Plus she constantly summons enemies, which I personally don't think is a great idea since it's just throwing more enemies in the situation to add artificial difficulty instead of being able to focus and learn the boss' patterns. Plus if you go to the left of the screen zombies spawn which causes problems like I mentioned above. I also don't really know if I'm doing damage to her most of the time. I don't see a health bar (except the bottom right which I'm guessing is a pleasure meter or something?) and some of the places you can hit her don't even seem to do damage. I found out you can hit her hand so I figured you could disable her blue attacks if you hit her hand enough but after using all of my shots, it didn't do anything. You need to be more clear on where the boss can actually take damage, especially since you have a limited amount of ammo.

- extend invulnerability after getting hit. Most of the times you just get hit twice by the same attack without a way to really react to it.

- I think the mushrooms should recover more than just 1 heart since there are only 2 of them and the 2nd one is pretty difficult to get them without getting hit.

- Knockback for fist attacks. I think the melee attacks should deal some knockback so enemies don't just stack on top of you and hit you anyways.

Overall, I do think this game has potential and I don't want you to be discouraged by any negative feedback, but right now it's way to tedious to play and  most people aren't going to invest the amount of time needed to beat this before just giving up. Especially since this is a porn game. I know you can probably get through this game really easily, but you got to keep in mind that you have the bias of making it. You know exactly how things work are also going to be patient enough to learn it's nuances, because you already knew them. There's no problem with making a game that provides a challenge, but there is a difference between challenge and add difficulty just for the sake of it. I'd recommend revamping the way you handle the challenge of the game if you want people to engage with it more. Regardless of if you implement some of my ideas or not, I hope development of the game goes well in the future.

Thank you for your feedback! Lets me answer your points:

1: limited ammunition
Do you know there's some shining spots on the tree? there's some hidden fruit. it heal your mana [more ammo]
And there's planned shops and passive skills. Enemys will drop good stuffs!

-2: Too many enemies  and not a good way to deal with them
The Golden Orb is powerful but rare it must be used wisely, a easy way to kill the Undead Fairy is just selecting the golden orb and right click. she die with 3x Golden Orbs, the exactly same amount that you throw. And she is the hardest enemy until now. Try to use melee atack with zombie and snake. the non-flying enemys was just planned to be annoying than real challenge.

-3:The boss
- Stone do 7x times more damage than Purple Orbs at her upper armor locker, it's the best thing to break her locker!
- Purple Orbs do low damage at armor.
- Golden Orbs and stones hitting her skin make her get angry! avoid it!

Upper BAR -> LOVE: It fills rising her pleasure, to win the battle your must throw a purple orb at her puzzle, it must be the LAST hit when this bar is full!
Lower BAR -> RAGE: Try to keep it low, Higher Rage means her use strong attacks and attack more often!

NOTE:
The game needs a tutorial map for when you starting playing, you know how things works and everything will be easier. This was already planned, but I decided to release without it. haha ha 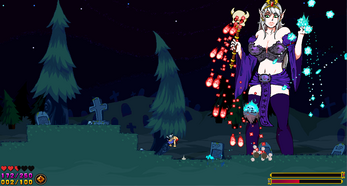 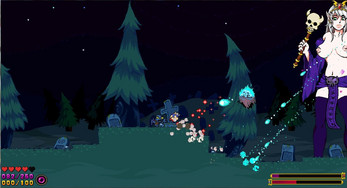 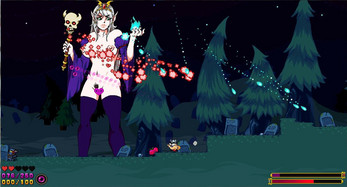 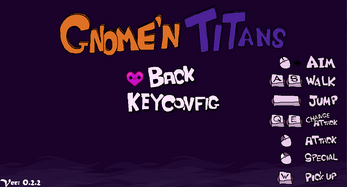